There is something ironically sad about looking back on fond memories.  They were so wonderful that you want to relive them.  But you can’t.  So you file them into a happy place and visit them from time to time.

I would love to jump on a plane bound for Australia again and say hello to the guys that made my 5th CD “THESE DAYS” a reality.  I’d like to walk down the same beaches that helped inspire lyrical ideas, or swap trivial stories with the locals, stare out the window of the downtown trams at the passer-by’s and of course, step back into the studio with the blokes who helped create the album.  Fond memories are usually moments you would love to experience again.

I could sing any lyrics and you wouldn’t know!

Perhaps that’s one of the reasons making a CD is something I absolutely love.  It’s not just about the song.  It’s about the whole journey.  It’s about the hard work, the goal of making this dream a reality, the great friends that share the same interests, the challenges, the small details, the life long memories, and ultimately the final product.  Then you have it. All wrapped up and stored onto a compact disk in the palm on my hands.

For me, “These Days”, isn’t just an album of tunes.  It’s a chapter in my life.  A challenge set out and completed.  It’s an idea that started with a chord on a guitar, a melody in my head, or a lyric stolen from a street sign. It’s a search for a cheap airplane ticket, it’s hotel rooms, a new city, new friends and a common goal.

I see a million small tasks that I must do for my dream to finally become reality.   I see the inspiration of family and friends and above all, I see myself doing something that gives me a sense of self-accomplishment.   When it’s finally done, there is an immense satisfaction I hold but at the same time a yearning begins to do it all over again.  An addiction to the whole process.  A desire to be better.  The drugs have kicked in and I’ve started new memories.  I’ll be recording the newest CD in Nashville come August 2013.

My music is out there in the internet world everywhere.  Now on SoundCloud as well. Download this song for free (right from the player.  JUST ONE CLICK) as a gift from me to you for following my blogs.   Cheers friends!

How is everything going? I hope spring is in full bloom and you’re able to get outside and enjoy some decent weather. It’s been fantastic weather here in Japan and it’s nice to put winter behind me for a while.

I want to give a big thank you to all of you who have joined my mailing list and my eteam. As you might know, I’ve posted a couple new songs on my site for free download. I’m really happy with how many came by to grab them and leave comments as well. The newest song “What Have I Done” as you know, is a really rough demo (recorded in my bedroom live). It needs a bridge, and the lyrics need to be moved around, axed, or altered. But the feedback on the song makes me think I might just re-record it when I’m making my new CD. Hopefully in the upcoming months I’ll post some other ideas I have so that I can get your honest feed back. I really want the songs on the next CD to be for you. Meaning – while I always write from the heart, I write often and sometimes it’s hard to know which songs will end up being the most universal. Your opinion really matters to me.

May was a great month for gigging and it was nice to play on a regular basis after a fairly quiet winter. Hands down, playing live is where I sell most of my CD’s. It goes to show there is nothing more captivating than a live performance. To me, a great CD and a great live performance are completely separate from each other. A great CD can have all the bells and whistles and be polished to perfection but doesn’t always show the true artist. I wish I had a chance to play live in front of most of you on a more regular basis. If I get enough support and a healthy budget I am planning on doing that after the release of my next CD.

I would really love to know more about your music interests. What do you like in a good CD? What do you like in an artist? How I could better myself? How can I better my interaction with you? If you have any questions or comments please email me or join my forum and share your thoughts. Again, I’m looking for ways to improve in all areas of music. After all, it’s not called the music business for nothing.

I hope to see you around and thanks again for your support!

Okay, so I’m really guilty of not maintaining this site on a regular basis.  I’ve been devoting most of my time lately to writing new songs and keeping my homepage updated.  So, what I think  I’ll do is blog half the time here and copy and paste some of the things I’ve been doing from my official website.  I’m also on Twitter a lot too if any of you want to drop by there.

Wow, there is so much happening in the world of Kelly Pettit lately. I am just really excited that I have stuck with doing what I love. The last 365 days have been amazing for me as a musician. Here are some of the highlights:

 Out of 2000 bands competing for top prize of $200,000 worth of promotions, marketing and gear, I won the Ultimate Band Contest thanks to the support of family, friends and fans.

 By far my busiest year as a performer in Japan. I have played some incredibly cool festivals, functions and gigs including a concert where my good friends Jerry Wong and Aaron Grant came to rock out with me.

 I have received some great press from TV, radio, newspaper, magazines and internet.

 My song “She’s Just Like Summer” was nominated for best in Pop at the Hollywood
music awards.

 The famous ABC’s Fame Games radio show which has 4,400 affiliate radio stations reaching more than 105 million listeners a week has made me a house hold name for listeners of their show. My song “She’s Just Like Summer” won track of the month a half year ago. Recently they held their annual Effigy Awards and I was nominated for 5 awards (Best songwriting, most popular song, Best overall song, Best song in light rock, Best song in Country) and took home two of them (Best song in Light Rock and Best song in Country). Not bad for a small town kid who now lives in the rice fields of Japan. Simon and brother Tony Cowell have backed up the show and even mentioned my name a couple times.

So what does all of this mean? Well, I suppose time will tell but for now it has given me a lift. It offers me a sense that I really am a songwriter/musician and that I am on the right track. This is the kind of stuff that feeds the fire and keeps my passion burning strong. In fact, I’m really excited to get underway and start recording my next CD.

In the meantime, thanks for coming by, thanks for helping me stay in the game, and thanks for sharing in the journey. You helped get me here. 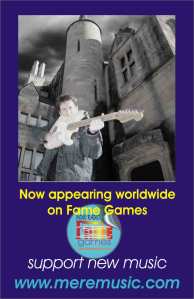 The trip back to the west coast (home).

Well, after flying back to Canada for 4 weeks to tour the west coast and visit family, I found that trying to kill two birds with one stone isn’t as easy as it seems. Thanks to UBL and all my fans to help me win the Ultimate Band contest some 7 months ago, things have been moving slowly but steadily towards a brighter future. It’s a constant battle like Dr Jekyll and Mr. Hyde to find harmony in being a musician and a business man for the music. I have found a love for both but 24 hours in a day just doesn’t seem like enough to make them both harmonize.

Stepping off the airplane in Vancouver, Canada led me jet lagged yet racing down to Seattle in a car with my father to pick up some music gear I purchased with one of the UBL prizes I redeemed so gratefully. The next day I was rehearsing with some great musicians for the up-coming shows in and around Vancouver looking like I had been on the whisky bottle for a week thanks to time zones and lack of sleep. Mark Geraghty and Kate Polsky added volume and depth to my music as well as a belly full of laughs and rekindled memories. It wasn’t easy trying to make time for practice and everything else on my plate. I keep a truck in Nanaimo that hardly gets used but when I dust it off, and remind myself to drive on the right side of the road, it’s a real life savor. I use it to zip between a divorced mother and father, a frail grandfather, friends with beer in their fridge, and all the things required to make a concert happen.

Fortunately for me, my father took over a lot of the duties and really stepped up to make the 7 shows possible. In fact, I think he missed his calling. He organized press coverage and cool venues and by the time he was finished there wasn’t a soul left in Nanaimo who didn’t know what I was up too. In some cases it felt like a high school reunion where old friends came out of hibernation to say hi and catch my shows. I literally hadn’t seem some friends in like 18 years! My mother and her hubby Fred came up from Victoria to two of my shows and I took a photo of my mom and dad together again. That’s as rare as sushi. Even Vancouver Islands, CHECK 6 news came to one of the shows to cover my story but none of us really knew how they were informed? You can watch it here. Some of the Vancouver shows were cool too. Jerry Wong and Scott Jackson were present. The incredibly talented Jerry jammed a tune with me while Scott did an evening gig with me.

Call it a wonderful disaster if you will but I had the good fortune of meeting a myspace fan/friend/music reviewer Shannon Ambrose. She flew in from Calgary just to watch a few shows. The highlights include going out for brunch and having a quite time with her and other friends in a bar after one of the gigs. We shared some stories of familiar acquaintances and got to meet in person rather than on MSN. Yet, I couldn’t help but feel sorry for her for making such a huge effort and then I had to cancel one of the gigs because I was sick. She came all that way to only catch one show (which turned out to be the big dud of the lot as well). Sorry Shannon!

All in all, the Canadian/USA trip was incredible. The support and coverage I received was impressive and touching. People really went out of their way to make things happen and I’m still moved by it. I sold lots of CD’s, had a fan make Kelly Pettit t-shirts, got newspaper, radio and TV coverage, all while standing next to my friends and family. A real highlight I won’t forget anytime soon.